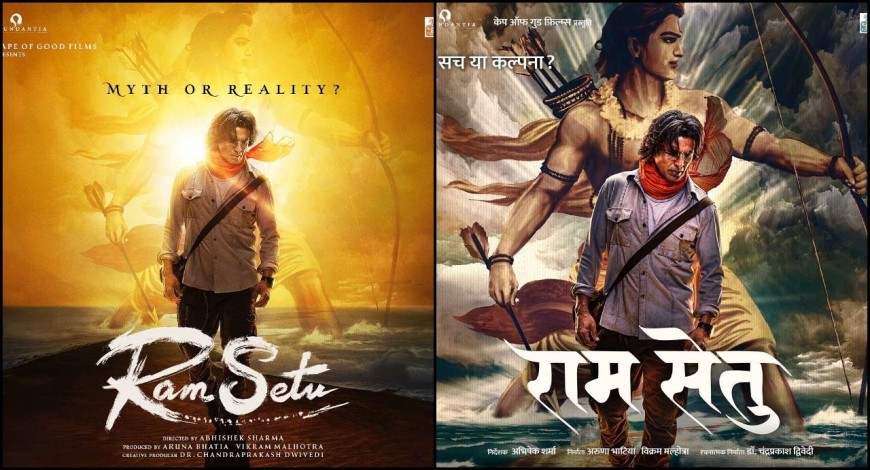 It is all known that Bollywood's ace actor Akshay Kumar is busy with a handful of movies. His last movie Prithviraj bagged a decent status at the ticket windows. Now, he is all gearing up for the release of his upcoming movie Raksha Bandhan and Ram Setu. Both these movies are the most-awaited ones and are made with interesting concepts. It is all known that Lord Rama's Vanar Sena built Ram Setu to cross the sea to reach Lanka. Now, Akshay Kumar is all set once again to make us know the truth behind the bridge with this movie. It has Jacqueline Fernandez and Nushrratt Bharuccha as the lead actresses.

Off late, there were a lot of rumours doing round in Bollywood that Ram Setu will get a direct OTT release. But the makers cleared the air and thrashed the speculations. Bollywood's trade analyst Taran Adarsh confirmed the news and dropped a post on his Twitter page…
https://twitter.com/taran_adarsh/status/1537815514004738048?

This post reads, "'RAM SETU': IN CINEMAS, *NOT* OTT... #RamSetu - starring #AkshayKumar - will release in *cinemas*, NOT on any digital platform, as speculated on social media... "#RamSetu will celebrate #Diwali 2022 in theatres, as committed," producer #VikramMalhotra sets the record straight." On the occasion of Diwali last year, Akshay made a special announcement regarding his upcoming movie 'Ram Setu'. This film is helmed by Abhishek Sharma and bankrolled by Aruna Bhatia, Vikram Malhotra and Akshay Kumar under Cape Of Good Films and Abundant Media banners. Well, the shooting was also kick-started on Diwali festival and the movie will hit the big screens on the same festival day! This movie also has Tollywood's ace actor Satyadev in the prominent role. Ram Setu will hit the screens in this October, 2022 and the exact release date will be finalised just before the release of the movie!

Actress Sargun Mehta, who is already known in the Punjabi film industry and was recently seen in her home production 'Saunkan Saunkne', is all set to make her Bollywood debut soon. The actress will be seen in a Bollywood film called 'Mission Cinderella', which stars Akshay Kumar. "It's very important to wait for the right role, no matter where you are stepping in, especially when you are stepping in a new medium because altogether there is a new audience and they are," she says.

"They are going to perceive you and look at you in a certain way. Even the industry has formed a perception of who you are. When I was choosing it, I didn't want to stand aside and be not talked about. Whether good or bad, but no matter what it is at least there is something to talk about." Bollywood is quite different from the Punjabi film industry, the actress says, adding: "The Punjabi industry is still very raw. Frankly, that is also working for the industry. It's raw, upcoming since it's evolving, we are still going through our phases to find out what the people like, and what will the audience like.

"Sometimes films surprise you in a way that you didn't even expect. There are no fixed strategies, not yet at least. People think that there is no discipline and structure in the Punjabi film industry. I am somebody who has discipline in my life but I personally don't feel that there should be a lot of structure in a creative space. I enjoy being all over the place sometimes."

The actress says that she was quite anxious and very excited as well. "I was so scared at first. I was excited because it's my first project in Bollywood and it was Akshay sir. Everything was giving me the jitters and I can't begin to tell you how I gave my first shot. "I thought I would collapse. It was a rough and tough role and I was thinking about how I would do it. I am really scared and I hope it comes out well," she says. To prepare for the role, Sargun made sure to stop watching cops on screen. "I think we have all watched cops since we were kids, whether it's real life, TV, films etc. When I did this role, I made sure I wasn't watching anything. I just feel that when you watch a lot of something, you tend to copy it and make a caricature out of it. I wanted to do whatever comes to me naturally," she concludes.