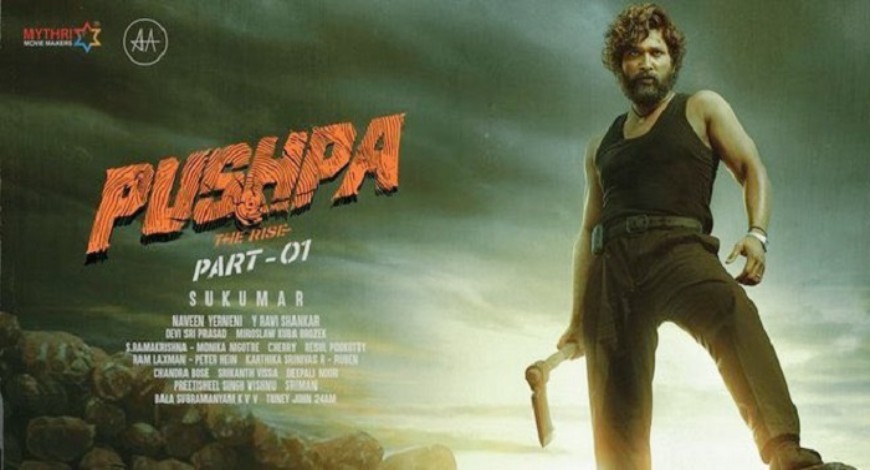 Having steadfastly kept away from the staple diet of Telugu  in Hind one was not aware of what one was in for when one went to see the press preview of Pushpa at the invitation of a major, local PR agency, Firstly, an eponymous film, the title is an abbreviation of PushpaRaj. Pushpa, by itself, means a flower, and is feminine. You might be pardoned for recalling Rajesh Khanna’s immortal dialogue from Amar Prem, “Pushpa, I hate tears.” This Pushpa, on the other hand, abhors tears, and is arrogance personified, to boot. He is also a genius, with a completely crooked bent of mind, and rises from the position of a coolie to a kingpin. It has Allu Arjun in the titular role,  The Speak along with support from Tamil, Kannada, Bengali and Malayalam speaking actors. While a few fights and dance steps might be new, the plot lacks novelty, and the length is indulgent.

An ‘illegitimate’ child of a rich man, Pushpa is disowned by his father’s family and grows up a fatherless child. He dotes on his mother and develops an arrogance that can only be attributed to his family situation. Landing up a job as a coolie, he sits on a chair in his break time and smokes a bidi, crossing his legs. Just then, the owner of the facility arrives, and everybody bows down in reverence, but Pushpa continues as if nothing has happened. Crossing one’s legs is considered disrespectful in Indian society, and this writer was once warned not to do it in a lower court, when the judge was present. Pulled up for his insolence, he quits the job, and heads for greener pastures, which, in his case, mean the smuggling of red sanders (red sandalwood/’gold’) wood, found in the Chittoor area. This wood travels from Andhra Pradesh to Chennai and from Chennai to Shanghai and then on to Japan, where it is in great.

Obviously, the entire operation is controlled by a handful of smugglers, who bribe their way out of Andhra Pradesh, and from then on, agents take over, and reach it to Chennai ports. Gifted with an evil genius mind, Pushpa works out more lucrative and less detectable methods of smuggling, while working for the three Reddy brothers. He then proceeds to take on the police and the Chennai agents,

Along the way, he forges a friendship with a fellow labourer, who sees great potential in him, and gets infatuated with a girl. His approach to courtship and love is unconventional, to say the least, and he initially comes across to the girl and her friends as a crazy, compulsive flirt. But gradually, they get closer. All is proceeding smoothly, when the Deputy Superintendent of Police  of the area, who was heading a corrupt to the core force, is transferred elsewhere, and an egotistical Indian Police Service officer, arrives from Haryana, to take charge. He is corruption personified, with the added trait of forcing the smugglers to deify him.

Written and directed by Sukumar Bandreddi,  Arya 2, 100% Love, 1: Nenokkadine, Nannaku Prematho, Rangasthalam), the film is possibly inspired by some of the liquor smuggling Hollywood films of the 50, 60s and 70s. Due credit must be given for the attention to detail and choosing the just right, lush terrain and locales. That said, there is nothing new in a smuggling tale, involving syndicates and corrupt police officials. There is a lot of calculation and math in the script, just to remind you that Sukumar was a mathematics and physics teacher before he found his true calling. Creating a family of three brothers, with different personae yet common goals, running a smuggling ring, was a good idea.

Characterisation is commendable, with the looks and get-ups of the actors blending with their roles. A completely deglamourised Allu Arjun is a far cry from his normal self. He is an amoral anti-hero, with his love for his beloved, his mother and his buddy being the only redeeming factors. It is not explained how the labourer-turned-smuggler suddenly learnt to drive a car, which he gifted to his pal. His progression from a nobody to a big gun is well delineated, with even his dance steps improving as he rises in ‘stature’. Much is made of the confrontation between Pushpa and the new police officer, but that is a confused bit of verbose writing, redeemed only partly by the way it is resolved. Pushpa’s courting of his lady love is strange, to say the least, and it is not something we might have seen often in films of any Indian languages. Dubbing is well-executed, with an unfamiliar, effective voice-over included.

Enjoying his brash, brazen character every bit, Allu Arjun looks even older than the 39 summers he carries. Screen time, judiciously, is not hogged by the lead actor, who is a star. Having worked with Sukumar in a handful of films already (his very second film as an adult was Arya, with Sukumar), this child star turned hero oozes confidence. Like all other actors in a dubbed film, the performance cannot be assessed fully because of the language issue and the borrowed voice. As Srivalli, Pushpa’s love interest, Rashmika Mandanna (native Kannada speaker who works in both Kannada and Telugu films) makes a great impression. Her role is well written too.

Dhananjay, Ajay Ghosh and Rao Ramesh as the Reddy brothers, with one of them one-handed, are entirely credible as underworld operators with only the law of the lawless to swear by. Sunil and Jagadeesh Prathap Bandara are passable. Shatru, who has played a villain before, is cast as DSP Govindappa, not the best role in terms of writing. Also in the cast are Anasuya Bharadwaj, Ajay, Sritej, Brahmaji, Malavika Wales, and Samantha Ruth Prabhu, in a special appearance, in the item number Oo Antava Oo Antava, which is retained in original Telugu. Mime Gopi as Chennai Murugan strikes a chord. Fahadh Faasil (actor producer, Malayalam and Tamil films) as Bhanwar Singh Shekhawat, the Haryana cop, is markedly fair in complexion, compared to most other actors, who are rather dark, which goes with his role. Shaving his head bald gives him that ultra-sinister edge. Although he comes into the film in its last quarter, this could have been a great confrontation, with some better writing.

Poland-born Mirosław Kuba Brożek (Gang Leader, Polish films Botoks, Plagi Breslau, Pitbull: New Orders) is the cinematographer, and they did need someone who could work in this jungles and poor light to replicate the scenery in question. A good job, without question. To edit the film, Sukumar fell back on his trusted man, Karthika Srinivas Ruben. While the cutting to the chase is often repeated, with élan, the 179 minutes become a little too much to sit through. To be fair, Ruben has to do justice to several angles: Pushpa’s lineage, his rise, his love, the gang wars, the syndicate and the police. In context, one cannot really nail him for going so far. Music and songs by Devi Sri Prasad (DSP; don’t blame me if it reminds you of a heady brew) are often loud and some of it is both repetitive and unnecessary. Now, when you have had 179 minutes of a less than original narrative unfold before you, to learn that there is a Part 2 coming your way next year makes you wary.

Pushpa is mounted on a grand scale, and with a more original crime angle, could have made the mark. As it stands, it smuggles through to an average rating