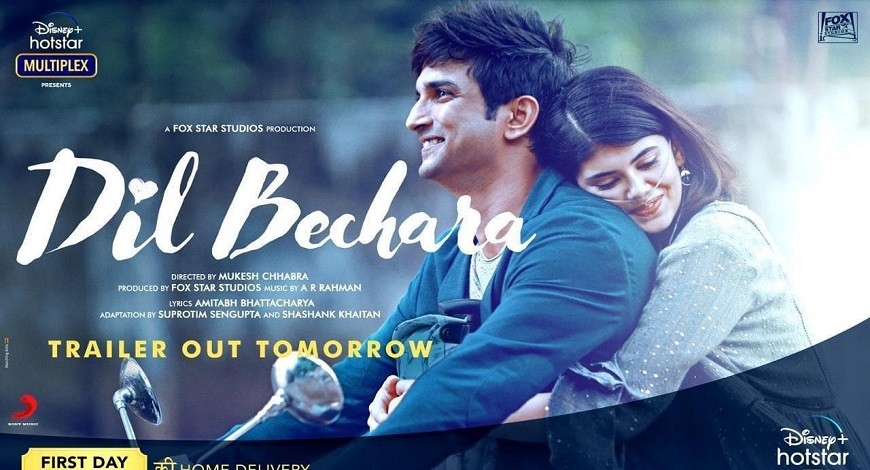 In less than 48 hours of its release, the clip has amassed a whopping 7.7 million (77 lakh) likes, thus becoming the most-liked film trailer on YouTube, beating the other global blockbusters like Avengers: Endgame (2.9 million likes).

Dil Bechara's trailer has been viewed more than 4.2 crore times.

The trailer of Sushant Singh Rajput’s last movie ‘Dil Bechara’ was released on 6th July on Fox Star Hindi channel on Youtube. By this time it has almost crossed 23 million views. The trailer broke Avengers: Infinity War and Avengers: Endgame records for the most liked trailers. Standing tall with 5.1 million likes in just 24 hours, it has become topic-for-the-hour.

What is the film all about?

Based on John Green's popular 2012 novel The Fault in Our Stars, Dil Bechara tells the story of two youngsters: Kizie (played by debutante Sanjana Sanghi), a young girl suffering from cancer and Manny (Sushant), a boy whom she meets at a support group.

The two go on an emotional roller-coaster journey as they explore the experience of being alive and in love.

In the whole movie, they will embark on a sad-and-sweet journey to live life to the fullest before fate takes them apart. Saif Ali Khan is playing a cameo in the movie. AR Rahman has composed the music while lyricist Amitabh Bhattacharya wrote the songs. Music-wise, it is one of the highly-anticipated films of 2020. The 2014 Hollywood movie starring Shailene Woodly was well-received, and it did over 307 million USD worth business at the box office across the globe.

Though Sushant Singh Rajput’s movies will always stay around, thanks to OTT platforms and digital technology, Dil Bechara is the last chance for his fans to embrace his excellence on the silver screen. Rajput, who committed suicide in June, has been a topic of controversies and discussions from the day of his death. Many celebrities from the film and music industry exposed the problems faced by struggling actors and even established celebrities. Nepotism, favoritism, ego and jealousy are the ugly side of Bollywood that allegedly took the life of a young actor.

Previously named ‘Kizie Aur Manny,’ ‘Dil Bechara,’ was supposed to be released on 29th November 2019, but it was postponed multiple times. In March, its release date was postponed again due to the Covid-19 lockdown. Finally, it was decided to release the movie online on Disney+Hostar on July 24. The trailer is currently trending at #1 on YouTube.